Any progressive sheep breeder knows the keys to success start with a sound reproductive program, and that reproductive health starts with the overall health and nutrition of your animals. Progressive club lamb producer Tyler Pickinpaugh started his flock on his family’s ranch near Torrington, Wyoming, but has since relocated Pickinpaugh Livestock to Lincoln, Nebraska, where he and his wife run about 60 head of club lamb mamas and a handful of white dorper ewes.

Pickinpaugh’s goal is to raise lambs to sell into the show industry while making an impact on young people. He lambs in January and starts selling his show prospects in late February and March, mostly through private treaty. Although he initially sold a majority of his lambs down to Texas, he has started building a customer base closer to home throughout the Midwest.

“I like to get people on the farm and looking at the lambs and their mothers. It is good to visit with customers and potential customers,” he said. “Our goal is to eventually attend more live sales.”

Pickinpaugh knows that his lambs’ health starts before they even hit the ground. He’s an avid believer in the nutrients his flock receives from the DuraFerm mineral line. Although his family used the DuraFerm minerals powered by the Amaferm® advantage some while he was still in high school, he said he has used it vigorously for the past three years, with great results.

“Since I started feeding the DuraFerm Sheep Concept•Aid® mineral, I’ve seen an increase in my ewes’ fleshing ability, they are heavier weights and last year, I had 100% conception rate on both A.I. and natural bred. The first year I used the loose DuraFerm mineral I had 97% conception rate, so it is doing what it says it will do,” he said.

Pickinpaugh runs his ewes on a dry lot situation with grain and hay, and that is when he feeds the DuraFerm Sheep Concept•Aid, a loose vitamin and mineral supplement that contains organic zinc and manganese, selenium yeast and high levels of vitamin E to support maximum reproduction and health. All DuraFerm products also include Amaferm, a precision prebiotic designed to enhance digestibility by amplifying the nutrient supply for maximum performance. Amaferm is research-proven to increase the energy available to the animal resulting in more milk production as well as the ability to initiate and maintain pregnancy and fertility.

The ewes stay on the DuraFerm Sheep Concept•Aid until weaning, helping provide their lambs the nutrients they need passed through in their milk. Once the lambs are weaned and the ewes are turned onto grass for the summer, Pickinpaugh said he gives them the DuraFerm Sheep Concept•Aid Protein Tub. The Protein Tubs offer the same nutrients with an additional 16% protein, something Pickinpaugh relies on to help get his ewes back into shape.

“The Protein Tubs do a really good job of bring all the ewes back to an ideal body condition score. One thing I’ve noticed is the ewes will limit their own consumption. The overall consumption might seem lower than some other tubs I’ve tried, but I know they are getting everything they need because they look good,” Pickinpaugh said.

Another product that he tried for the first time this year is the DuraFerm Sheep Concept•Aid HEAT®. In early June when the temperatures soared, he noticed his ewe lambs went off feed and seemed uncomfortable. Pickinpaugh witnessed the HEAT package, which includes all-natural plant extracts to help maintain core body temperature, work.

“The HEAT mineral seems to be working really well. I replaced the standard Concept•Aid with the HEAT mineral and since then haven’t noticed any of the ewes aggressively panting or any other signs of heat stress that I saw earlier,” he said.

Success starts from within. A producer can’t get much more successful than 100% conception rate. DuraFerm helped one young, progressive sheep producer strengthen his stock and ewe conception rates, and it can work for you. 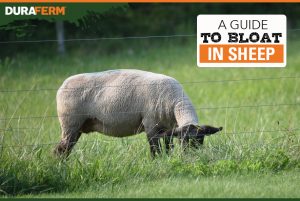 Bloat. It’s that uncomfortable feeling that you might experience at the first holiday potluck at your future in-laws. You’ve grazed your way through the day, munching on wonderful specialties from the wonderful cooks’ and bakers’. At the end of the day, you are miserable, full beyond belief, perhaps even bloated, but you didn’t die. However, when sheep experience bloat and it isn’t treated, it […] 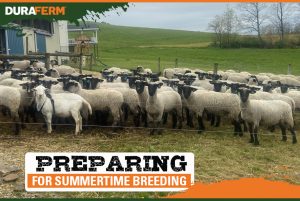 We typically think of springtime as a time of birth and growth. Gardens are planted, flowers bloom and newborn lambs and kids are jumping around on the farm. However, with changes in technology and the evolving demand for lambs and goats at various times of the year, more and more producers have started breeding in […]