Lambing time is approaching, and that can only mean one thing. It’s time to get your barn clean, set up and organized, and make sure you have your lambing kit stocked and ready. Hopefully, you’ve already prepared your ewes from a nutritional standpoint, so they are ready to deliver vigorous, healthy lambs.

As the ewes are bagging up and gestation calendar shows that lambing time is getting closer, Chad Charmasson, owner of Charmasson Club Lambs of Hennessy, Oklahoma, begins splitting off his ewes with the earliest lambing dates into a drop pen that has lambing cameras on it. He can check the cameras from his phone or from a Smart TV in the ewe barn. Once he sees an ewe in labor, she gets separated into a pull pen for closer monitoring, and where she can be assisted if needed. Charmasson said he rarely has to pull a lamb, and he tries to avoid giving assistance if possible.

“We try to let them have a natural birth. Let them struggle and strain so they get used to the lambing process, especially the younger ewes so they don’t get dependent on the help. We use our hands, and make sure the feet and head are in the right direction,” he said.

If you do have to assist with a birth, get your hand and arm clean with warm water and disinfectant, and use OB lube before sliding it into the ewe. Make sure the lamb’s nose and two front feet are facing outward, so the lamb is diving out to its new life. Pull one leg at a time to get it to move, and if possible, work with the ewe when she is having contractions.

Once the lamb or lambs are born, the ewe should have them cleaned off and they should be up and nursing within 5 to 10 minutes. If not, Charmasson said it is imperative to get the ewe’s colostrum milked out of her and get it tubed into the lambs so they warm up from the inside out and receive those first nutrients from her milk outside of the womb. Once the lambs have eaten, he will move the ewe and her lambs into a 5×5 jug pen where they will stay for 5 to 7 days, if space allows. He likes to give the new mama time to bond with the babies and make sure all are healthy and doing their best before turning them out with all the pairs.

One thing that Charmasson has found to help increase lamb vigor in the newborns is feeding the flock DuraFerm® Sheep Concept•Aid® Protein Tubs from breeding to weaning. The DuraFerm Sheep Concept•Aid Potein Tubs contain 16% natural protein and are specifically designed to help the reproductive success of the flock when fed 30 days pre-lambing through breeding. They contain balanced levels of high-quality vitamin and minerals required for growth, breeding and lambing, such as organic zinc and manganese, selenium yeast and high levels of vitamin E to support maximum reproduction and health. In addition, DuraFerm contains Amaferm®, a precision prebiotic designed to enhance digestibility by amplifying nutrient supply for maximum performance. It is research-proven to increase the energy available to the animal resulting in more milk production as well as the ability to initiate and maintain pregnancy and fertility.

“Since we started using the DuraFerm Sheep Concept•Aid Protein Tubs, I’ve found those babies coming out are a lot more aggressive and want to thrive and get up and go a lot faster, a lot sooner. They are not as lethargic acting as what they are otherwise. Those ewes stay in good shape without having to feed them a ton of grain. As long as you have some forage out with them, those tubs keep their nutrition up where it needs to be, and they are still able to provide enough nutrients to those babies inside,” Charmasson said.

Post-lambing, he makes sure both the ewe and her babies are taken care of from a health standpoint. He administers the ewes a dose of long-acting penicillin to fight off any potential infections from lambing. Before they leave the jug pens, he gives them dewormer, as he doesn’t worm them the last 45 days prior to lambing to help prevent abortions. He said the wormer also passes through the milk and benefits the lambs’ health too.

After the lambs are born, they receive an oral vitamin and mineral drench to get their digestive system working. He gives them two shots; a shot of CD&T for tetanus and overeating, as well as Bo-Se to help warm their bodies up and for a boost of selenium. He also dips their navels in an iodine solution to help prevent infection.

Lambs will also receive two tags. A flock tag with individual identification will be put in one ear. A smaller, uniquely colored tag will be put in the other ear to help identify the sire group they belong to. Charmasson does not band tails until the lambs about 14 days old, to reduce the stress on the newborn lambs.

Once the lambs are born, tagged, and off to a good start, Charmasson turns them out with the other ewes and their new offspring. All the ewes receive grain and alfalfa, and as always have plenty of clean, cool water. They also are back on the DuraFerm Tubs after being in the jug pens.

“It’s amazing to me those babies will get out there, go to and lick those tubs, and I think that works extremely well for us because it gets the saliva going and gets them wanting to go to and eat creep even sooner. It’s funny to see those babies out there licking on the tub while they are still able to nurse those ewes. But if the ewes are out there licking on those tubs, the babies are right there beside them. To me, I think it has helped a ton on those sheep starting to take the creep and take to eating a lot faster as well. I do think it is important to keep the tubs out until weaning,” he said.

A solid nutrition program, good records to know when to expect lambs and a clean barn are the keys to your lambing time success. Be sure to keep your lambing kit stocked and ready and restock it any time you use something out of it. 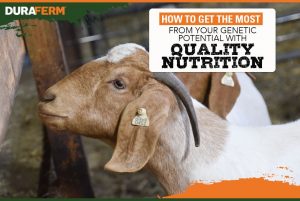 Genetics are just part of the equation. As sheep and goat producers, you have likely studied long and hard to make breeding decisions, but when breeding time comes, you want to make sure those decisions stick. Get the added assurance you need that your flock and herd are in their optimum health with nutrition from […] 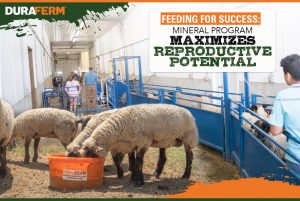 As a producer making an investment in future progeny, don’t you want to know that your ewes or does are getting the best nutrition to reach their highest reproductive potential? The investment into advanced reproductive technologies isn’t small, so have your females in the best shape possible with a nutritional supplement from the DuraFerm® line.  DuraFerm is a […]